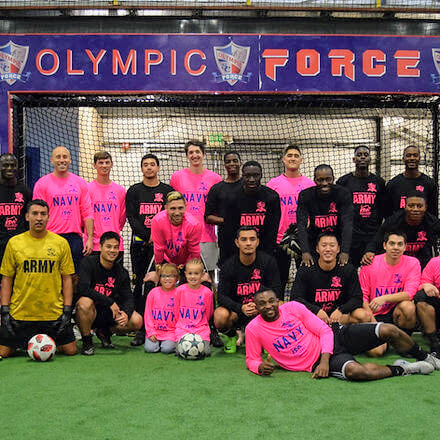 Leagues are split up based on skill-level and/or age. Each league plays games year-round. The games played are scheduled into individual sessions. When a league session starts, each player must be 18 years or older or 16-17 years old with parental permission. Some leagues play on the same day and time, but on different indoor fields. Games are 5 v 5 + keepers.

The league rules combine both the USIndoor Sports Association rules and facility rules.

The dates when each league session is planned to start is as follows (there are no adult league games on Saturdays):

Each session will be available for team registration in DaySmart a minimum of 3 weeks prior to start dates listed above. Dates above are subject to change due to facility closures, new leagues, tournaments, or other unexpected closures.

Drop-in games play on specific days and times and do not have rostered teams. Generally, players show-up, pay, and split up into teams based on the players that show. Each player must be 18 years or older or 16-17 years old with parental permission.

The adult soccer related fees are as follows:

League team fee balance must be paid in full BEFORE the first game. League team rosters lock after the third game of the current session.

For all other first and subsequent games, a sub fee will be assessed. Please review the league rules for more information and rules related to subs.

For questions, concerns, and feedback regarding leagues, please contact: info@bremertonsports.com

Details about youth soccer leagues offered at Bremerton Sports Center can be found here on our Youth Soccer leagues page.